VHS- Sleepless in Seattle The director and stars of 1998's You've Got Mail scoreda breakthrough hit with this hugely popular romantic comedy from 1993, about a recently engaged woman (Meg Ryan) who hears the sad story of a grieving widower (Tom Hanks) on the radio and believes that they're destined to be together. She's single in New York, he lives in Seattle with a young son, but the cross-country attraction proves irresistible, and pretty soon Meg's on a westbound flight. What happens from there is ... well, you must have been living in a cave to have let this sweet-hearted comedy slip below your pop-cultural radar. There's little complexity or depth to writer-director Nora Ephron's cheesy tale of a romantic fait accompli, and more than a little contrivance to the subplots that threaten to keep Hanks and Ryan from actually meeting. But the purity of star chemistry here is hard to deny, and this may be the first film to indicate the more serious and sympathetic side of Hanks that is revealed in later roles. With its clever jokes about "chick movies" and repeated homage to the classic weeper An Affair to Remember, this may not be everybody's brand of amorous entertainment, but it's got an old-Hollywood charm that appeals to many a movie fan. --Jeff Shannon (http://www.amazon.com/Sleepless-Seattle-VHS-Tom-Hanks/dp/6302936381/ref=sr_1_1?ie=UTF8&s=video&qid=1265826441&sr=1-1) 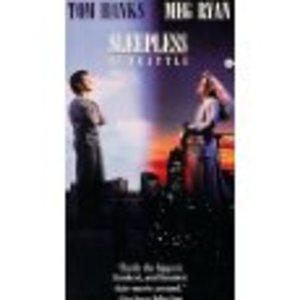