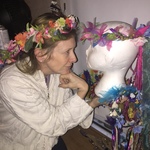 I really don’t have habits except I collect waay too much stuff! Well I have a bunch of bad habits but you don’t care about those…. (like I swear a bit too much) um, and then there’s that collecting thing, I’ve been told I could be a closet hoarder… huh? How do you hoard closets? But yeah I do tend to collect stuff I plan to use or may/might/could need…. later. But then I don’t get around to finding what I DO need. So here I am trading what I don’t need for what (I hope) I do need. OK maybe I got lost in one of those odd closets on that last one. (Hey I’m not living in the Winchester Mansion! or on an Episode of Supernatural that I know of, but I’m definitely NOT normal – that’s a setting on the dryer BTW). I lost a ton of weight (on purpose) and my sizes were all over the place so the only sizes that are stable are my shoe size (9.5) and jewelry which I love Indy, boho, ooak and vintage pieces… come to think of it I like clothes like that too… huh maybe that’s a pattern. I’ve always been into multi-media art (before it was trendy to say “wearable art” or “hmmm what can I make out of this thingy”?) I am always getting into paint, wood, dirt, rocks, broken or hot glass, metal shavings, plumbing messes (my Dad was a contractor) and pretty much most any other mess I can make when no one is looking. I am disabled now so I’m pretty laid up/back now, so I’m supposed to be taking it easy and I try most of the time to be good but it’s really hard when I’ve spent over half a century (eek) as a DIY’er, craft shower, makers marketer, farmers marketer (is there such a thing?) hey we own a farm… In NH ~ see told you I didn’t live in the Winchester Mansion ghats n the other side of the US! But I do live in a farm house that was built in 1768! Plus there are three more wicked old buildings on our farm as well. No animals except domestic, and wildlife, on whats left of an original 100 ac (we have 30 +/- now) King’s Grant before the Colonies got pissed off at Britain, and well then there was the battle at Bunker Hill, Valley Forge and rest is History. So here we are in NH on a super old historic farmstead (my husbands family has been here 7 generations, not the original settlers, but close). We grow a weird assortment of things… grapes (both white champagne and purple concord, walnuts (butternuts to be exact) which besides tasting incredible make really nice ink, an unknown species of apple but whatever it is makes a decent pie, a decent old world rhubarb, tomatoes, or whatever other vegetable my hub decides to plant, roses, lavender, assorted perennial and annual flowers and herbs. I’m always looking for new plants to start from and swap seeds. It’s almost as much fun as swapping clothes and other items! Yeah I’m a bit of a conundrum, but it’s more fun that way. Except I don’t fit in. Never have and never will. I’m a stickler for trying (note trying) to follow rules… like shipping on time and stuff like that. I’m late for everything according to my Hub (he just too cute) he swears a bit too lol. The brain works fine but the body wont cooperate so I have all this useless knowledge running rampant around in my head usually at night and wouldn’t you know the love of my life isn’t a night guy, He’s a lights out early guy… me, I’d still be up at 3AM if I didn’t pay attention or if he didn’t wake up because my light is too bright… He swears I’ve burned his retinas out. lol Maybe I’ll be putting up for sunglasses at some point for him. I do go to bed early once in every few um, years. (By now you’ve gotta know I’ve got a sense of humor even if it’s a bit screwed backward) so if it rubs you the wrong way, stay out of my hoarded closet(s) okay? They are already full as it is! ;-P BTW since when is size 8-10 a “Large” ? I could see medium maybe usually sm/med but LARGE? Uh, no, nope, nada, ain’t so. at least not in my world! That’s like….. oh, @ who cares.